Wired for Love: Are You an Anchor, Island, or a Wave?

Renowned couples’ therapist Stan Tatkin explains how three “attachment styles”
​affect our relationships and how we can become more secure with our partners. 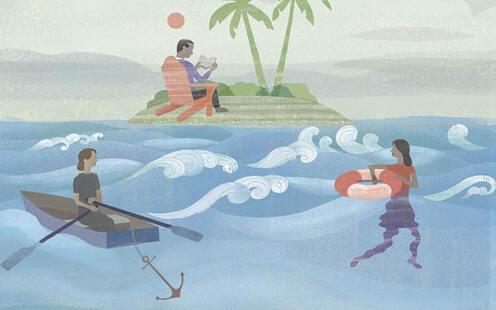 If you’ve ever fallen in love, then you know it feels pretty wacko in the beginning. You can’t sleep, you barely eat, and your beloved is all you think about. Your body and brain are flooded with a cocktail of chemicals, including dopamine, noradrenaline, testosterone, oxytocin, and vasopressin.

As it happens, other traits of the first blush — obsessiveness, compulsivity, anxiety, and panic — are shared by many mental disorders. There’s a reason we call it “lovesick.”

Yet humans keep falling in love anyway. How peculiar. And how romantic.

While falling in love is enticing enough to make us take leave of our senses, staying in love is how we enjoy the real rewards: mutual trust, regular affection, consistent support. For most of us, what really counts is what happens after the infatuation phase, when we demonstrate our ability to be there for one another, no matter what. And even if that capacity doesn’t come naturally, we can learn and nurture it.

I am a couples’ therapist by training, and I have developed and use a psychobiological approach in my clinical practice. For 25 years, I’ve observed how much something called “attachment style” influences our ability to participate in a loving relationship. This is because our early experiences with attachment create an instructional blueprint that remains stored in our bodies; that blueprint determines our basic relational wiring and sense of safety.

In a nutshell, these incidents program some of us to be fundamentally secure in our primary relationships, while others of us become insecure. And insecurity can make us distant, or ambivalent about relating.
But this can be changed. Partners can make love and avoid war when the security-seeking parts of the brain are put at ease. I explore this concept at length in my book Wired for Love. This is a summary of a few of the ideas found there.

Three Styles of Relating
The success of long-term relationships depends in part on partners acting as each other’s “whisperers,” in the animal sense. This means respecting each other’s vulnerabilities and knowing, without necessarily being told, what the other person needs when he or she is upset. Each partner communicates his or her needs and desires without resorting to threats, guilt, force, or manipulation.

This isn’t to say we should remain at the mercy of each other’s runaway moods and feelings. Rather, as competent “managers” of our partners, we can become expert at moving, shifting, motivating, influencing, soothing, and inspiring one another.

For some of us, this partner-whispering comes more naturally than for others.

In my work with couples, I refer to the three main styles of relating as “anchors,” “islands,” and “waves.” Each style has its own strengths and weaknesses, though anchors generally have the easiest time in relationships.

Most of us exhibit more than one style over a lifetime, though we probably fall back on the one we developed in childhood unless we’ve made a conscious effort to change. These are the three styles in detail:

Anchors (62%) are notoriously easygoing, and mostly unencumbered by fears of abandonment or loss of autonomy. They are collaborative and cooperative by nature, and they’re comfortable with physical and emotional intimacy. They can maintain that closeness for extended periods without anxiety.
They usually developed these traits because they had a secure relationship with a primary caregiver, and they’re able to bring that acquired sense of security into their adult relationships. I call relationships between two anchors “secure functioning,” because both partners relate in mutually beneficial ways.

Islands, (23%) in contrast with anchors, have a hard time staying connected to their long-term romantic partners. In therapeutic language, we call this the “avoidant” type.

On the bright side, islands are often independent, highly creative, and accomplished adults. But they frequently feel trapped in primary romantic relationships — especially when the going gets tough. They prize solitude and fear being subsumed by another person’s wishes and needs.

Islands are threatened by conflict and drama; they’re more likely to withdraw, keep secrets, and fear being exposed by partners who encroach on their privacy. As a result, their companions often feel neglected, unimportant, and burdensome.

Though islands can seem antisocial or selfish, they are often reacting to early experiences when they felt neglected by their caregivers. Experience taught them to self-soothe rather than risk depending on anyone else for support.

Islands often want close relationships but are afraid of the responsibilities of another person; they fear being needed but not really wanted. Their defensiveness is largely unconscious, driven by the conditioning of their nervous systems and brains.

Waves, (15%) on the other hand, deeply desire connection with a partner. They’re usually generous people, and their passionate intensity can make them fun to be around. Yet most waves believe that true intimacy is not really possible, and they live in fear of abandonment, withdrawal, rejection, and punishment. While islands have a fear of dependency, the primary issue for waves — sometimes called “angry resistant” individuals — is dashed hope.

The partners of waves often feel like their relationships are roller-coaster rides. Waves tend to cling to their companions while also behaving in ways that can be hostile and distancing. Separations and reunions may trigger pushing their partners away, even as they want connection. This comes from fearing deeply what they most want: a truly intimate relationship.

As children, waves often experienced role reversal with at least one parent, who was likely to have been depressed, anxious, dependent, overwhelmed, or angry. They were charged with caring for that adult’s emotional well-being, and this meant their own needs for connection went unmet. So, as adults, when they reach out for connection, they expect to be disappointed. Their reflexive negativism is a defense against that disappointment. I call this an “allergy to hope.”

Style Update
We can all develop a more “anchored” way of relating, though it involves a shift in thinking for waves and islands, who tend to put their own needs first — out of insecurity. Anchored relating requires mutuality, or putting your partner and the relationship first. Secure-functioning couples create a social contract, implicitly or explicitly, that ensures fairness, equality, and sensitivity to each other’s needs.

Let’s look at one hypothetical couple. Jerome and Chris are in their early 30s with two young children. Both parents work, although Jerome is less likely to fulfill his share of the household responsibilities. His tendency to think of his own needs first is characteristic of an island. He’s frequently secretive about his needs and plans, while Chris’s reactions to their impasses are often fast and furious. This is typical of waves, who want connection yet expect disappointment.

Here’s a typical encounter: Chris tells Jerome after breakfast that he’ll have to pick up the kids that afternoon because of an unexpected meeting at work. Jerome refuses, speaking evasively about other plans, and finally admits — under pressure — that he has plans to golf with friends. Chris explodes and complains loudly of feeling neglected and disrespected, while Jerome snaps back and leaves the house, retreating — island-style — from any further drama.

This situation might sound hope­less, and it may not be realistic to think the relationship can be healed instantly, but there is a path to success for this couple.

For starters, they could find a more relaxed time to talk, with the goal of establishing some shared principles for their relationship — such as “we’re in this together” and “everybody’s time is valuable.” These principles can guide them toward more supportive ways to interact the next time they have conflicting needs.

The point is to learn to be there for each other instead of putting their individual needs into competition. Even if Jerome continues to have an island-like love of independence, and Chris remains passionate and intense, their interactions can move toward an anchor style. It might go like this: It’s never too late for a couple to become secure-functioning. If you’re not there yet, don’t despair. Sit down together in a relaxed environment and discuss your relationship without falling into shame or blame. What does it look and feel like? What do you want it to look and feel like? How do you define success for the two of you?

A shared sense of purpose will give you something to rely on when difficulties arise; it will help you stay connected when you’re tempted to push each other away. Becoming each other’s anchor is worth the effort. It will make life’s stormy seas much easier to navigate.

3 Questions for Any Couple
As you discuss your relationship, with the goal of becoming more secure-functioning, ask each other three questions: Mutual purpose. It can be helpful to establish the purpose and vision for your union. Discuss the goals you agree on and those you don’t (for example, whether to have kids, where you want to live). Look for commonalities as well as deal breakers. What will you both do to sustain your mutual purpose?
Shared principles of partnership. When choosing your own principles, both of you must buy in and commit to follow-through, regardless of circumstances or feelings in a given moment. In other words, your agreed-upon principles must serve both a personal and a mutual good. For instance, my spouse and I have a shared principle that if either of us is in distress, the other will drop everything and help. We know how to pick each other up when we’re down and how to settle the other when unsettled, so we’ve agreed to do this without question.
Exclusive benefits. The third question sounds the most complex, but it’s probably the easiest to answer. What do you do for each other that no one else can do? There are as many answers for this question as there are couples in the world. So have fun with it.

This originally appeared as "Anchors, Islands, and Waves” in the June 2019 print issue of Experience Life.
FREE ATTACHMENT QUIZ
From Wired for Love: How Understanding Your Partner's Brain and Attachment Style Can Help You Defuse Conflict and Build a Secure Relationship, by Stan Tatkin, (Jan 2, 2012)